The Sitting of the Buddha is the selfless posture formerly called Dyana, Ch’an, or
Zen. In this Western version of Zen, all Japanese names have been deliberately
removed to make way for a European vocabulary that is easier to understand and
more suitable for our times.
When the Japanese monks brought Ch’an from China, they called it Zen, and the
posture of the Buddha became zazen. The monk Sando Kaisen Krystaszek decided
to sever his ties with a Japanese tradition that was too ritualistic and formalistic and
to keep only the essence of the Buddha’s teaching: “the Sitting of the Buddha.” He
has been passing on the teachings of his Master Mokudo Taisen Deshimaru for over
25 years in Poland, the Czech Republic, Slovakia, the Ukraine and Russia, as far as
Vladivostok, across from Japan.
From now on, in times to come, “the sitting of the Buddha” will flourish under its new
name. In this way, the essence of the Patriarchs is passed down accurately, and
Master Nyojo’s term “shikantaza” – “just sitting” – is replaced here with “the selfless
posture.” The sutras and texts are read and chanted in the language of each country
and no longer in Japanese or Sanskrit.
It is “the Sitting of the Buddha” that erases body and mind.
“In truth, do not try to achieve anything at all. Awakening means to awaken to the fact
that we are deeply lost.
In the past, there was no illusion, so today there is no awakening.” 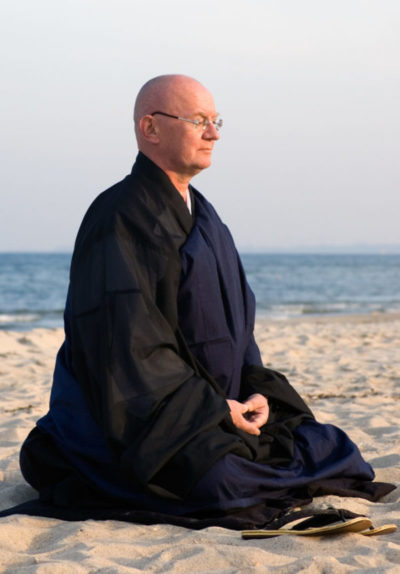